It has to be said that when I first saw the title of one of these songs I had pause for thought. I mean, calling something “Justin Beiber (Must Die)” is pretty much an open challenge for all those “beliebers” out there to descend en masse on the German Shepherd website/Facebook page in paroxysms of incandescent rage. Fear not dear lovers of JB all is not what it seems. 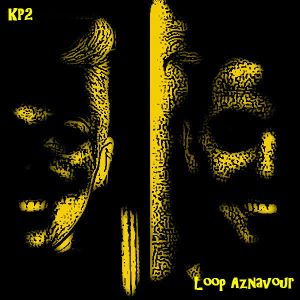 As usual with the lyrical wit and wisdom of the multi-nomenclatured spirit of Moet,  the title holds a far deeper and more significant meaning. Of course neither KP2, or indeed Loop Aznavour, are seeking the demise of the pop starlet. They are instead, and in a quite poignant fashion at times, actually trying the give the young man some worldly wise advice about the pitfalls and hurdles of the Music Industry. Todd Rempling’s artwork for the piece indeed shows the metamorphosis from JB to MC (Justin to Miley for those of you not hip to these things) and the song demonstrates that once any young pop star fails to meet his or her sales figures they will be cast aside and the “management” will focus its’ wherewithal on the “next big thing”. So indeed young Justin will not die but the brand image and concept he embraced for much of his teenage years will wither and pass away into the dusty 50p bin of history, as Miley or whoever is next, fills the slot in the arena tour calender.

It was the good offices of Salford City Radio DJs – Tony Thornborough and Steve Nicholson – that brought together KP2 and Loop. The marriage was indeed made in some punk/post-punk heaven somewhere or another. Probably half-way between Ashton Under Lyne and Bury. It was quite obvious really that a theremin toting ranter with an eye and ear for the absurd in daily life would work well with Moet’s particularly sideways view of the world.

Both songs are crafted to propel KP2s mutant rant to the front – but the music and arrangement is solid. strong and supportive.

Track 2 is timely – with Gideon delivering his own particularly odd view of the future on Wednesday – but which on close examination of the detail was a pre-election stunt to attract votes – a song about the abject failure of the current administration to cope with the recent extreme weather until the stock-broker belt was at risk hits the con-dems where they need to be hit -both metaphorically and factually. The deliberate inclusion of the break-down in the recording adds to the fun going on behind the serious message and Loop’s “J Rotten” quote in the chorus is both playful and a nod back to the heady days of the mid-70s.

A couple of excellent tunes say I.