Obake are back, with a second album out in October on Rare Noise Records. We are advised to expect something where the energies of metal fuse with ambient electronica, jazz, and noise with the precision of math-rock and the groove of blues.

Here is the band,  with Trevor Dunn on bass, at the Assymetry Festival in 2012

Le Butcherettes have joined Ipecac Recording’s roster and will release their second album release, Cry Is For The Flies, on Sept. 15 via the Bay Area label in conjunction with Nadie Sound. The album features guests Henry Rollins (“Moment of Guilt”) and Shirley Manson (“Shame, You’re All I’ve Got”).  Le Butcherettes is Teri Gender Bender (vocals, guitar, keys) and Lia Braswell (drums). Pending that here’s something from the Sin Sin Sin album

Pallbearer‘s new track “The Ghost I Used To Be” is available.   This is the first new Pallbearer song to surface from their forthcoming new album, Foundations Of Burden, which will be available on August 25th from Profound Lore and is available for pre-order now: https://www.profoundlorerecords.com/pallbearer/

I’ve reviewed the Wolves In The Room new album Celestite elsewhere on the blog, here’s another preview track….

Some forthcoming releases to keep an eye out for this month

This release is an expansion of their digital only debut Five Minutes which they gave away last year as a free download via their website. Bowl Ethereal are a duo from Virginia comprising Brian Metz (Amish Control Tower) on guitar, bass and production, and influential math metal luminary Pen Rollings (Honor Role, Breadwinner, Loincloth) on drums and also arrangement and deconstruction duties. On this Brad Boatright mastered 7″, the band opt for brevity, offering up 6 songs in 6 minutes (adding one more song to the original five). This 7″ is limited to 600 copies and shall be available at this link http://southernlordeurope.com/store/view/s-t-7 and here’s a link to find out more http://southernlord.com/bands/view/bowl-ethereal
CORRUPT MORAL ALTAR – MECHANICAL TIDES (SEASON OF MIST)
As previously reported hey have a string of dates coming up, none of which in the Manchester area – nearest options are 23rd July Maguires, Liverpool and 24th July Packhorse, Leeds. The album is described as a mixture of sludge and punk – looking forward to getting an advance copy to share with you via podcast.
ELECTRIC FUNERAL – TOTAL FUNERAL (SOUTHERN LORD)
A fully-comprehensive discography from Swedish raw punk act, Electric Funeral is due for release. The brainchild of Jocke D-takt – also of Paranoid, Desperat, Warvictims, Totalt Jävla Mörker and countless other acts – Electric Funeral’s pure angst-ridden style explodes out of the speakers with relentless noise, bursting with energy. The album surges with the sounds of Anti-Cimex, Gloom, Discharge and the like, to blazing speeds in the vein of Disclose and Krömosom, and charges straight at the listener with unstoppable force from beginning to end of every single track recorded to date, all of which are now packed into Total Funeral, with over an hour-and-a-half of carnage with fifty-three tracks in total, including the Harvester Of Death, Make Noise Not War,D-Beat Noise Attack, The Face of War, Make A Change, Gröndalen, In League With Darkness and Order From Disorder releases, the split with Go Filth Go, and even several previously-unreleased and new/unreleased tracks. Here is their 2012 release.
http://youtu.be/kMiBF9R5o_A
MARTYRDÖD – ELDDOP (SOUTHERN LORD)
Martyrdöd have completed recording their fifth album, Elddop, at Studio Fredman – the follow up to the powerful declaration of political rage that was Paranoia in 2012.  The band’s fifth LP is the most emotionally intrusive record of the Swedish four-piece yet. Relentlessly forcing its way into the most obscure corners of the human mind, Elddop challenges the darkness by way of confronting it, and thus already pierces its way through the black, towards spiritual release.
The daring 14 song record allows Martyrdöd to elaborate on some of the musical themes and influences that have long characterised their sound. Securely placed in traditional Swedish hardcore punk such as Anti-Cimex, Martyrdöd stands on the shoulders of giants, seeing further, wanting more. Enchanting melodies and Bathory-esque folk music finds a perfect fit in war charged d-beat mayhem.
They have also recruited Fredrik Reinedahl on bass, who has stacked up production and engineering credits for bands, Sólstafir, Abandon, Burst, Crowpath, Dimension Zero, Gadget and Memfis to name a few.
Southern Lord release the CD/LP release in July with a special European version of the vinyl coming out on La Familia & D-beat Raw Punk. This release comes as perfect timing as the band shall be touring the UK and Europe with Converge throughout August, a great opportunity to hear their new songs live. The play Club Academy, Manchester on 4th August. 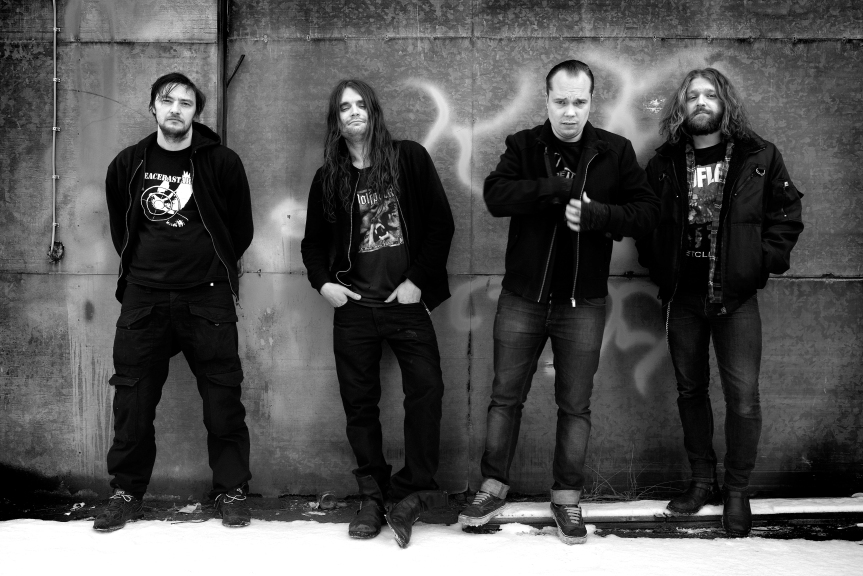