As Mr Moss once said “Strap yourself in, it could be a rough ride…..”, welcome to another bumper edition of some Fascinating Things sent to me by those lovely promo people…..there is a curious mixture of things this week from sprightly pop, via electro, ethereal drones to more heavy stuff.

Kranky have announced plans to release the fourth Loscil album, “Plume” for the first time on vinyl format. This classic record, originally released May 2006, will be released via the label on double LP 16th October. This news arrives as Loscil aka Scott Morgan also reveals tour dates in November, which marks the first official European tour since the release of the most recent album “Sea Island”.  For those of you who live near me he is on at The Eagle in the Blackfriars area of Sunny Salford on November 23rd, one of only three UK dates, so a bit of a coup for us lot round these parts.

​Scottish four piece Proud Honey launches new single ‘​Weekend Millionaire’ ​out on the 17th October 2015, Influenced by a credit card fuelled stag do on which the band members went out on the town and spent ‘ridiculous amounts of money we didn’t have’, Already nominated for best British band 2015 by Pure M magazine (never heard of it but I don’t suppose they’ve heard of me), the band have also been compared to the varied and brilliant likes of The Stone Roses, The Verve, Primal Scream, Oasis, the Charlatans and many more classic British bands. Of course they sound absolutely nothing like any of them – I was reminded of the blues rock bands I used to go and see in the early 1970s…..Stray, UFO etc

“Mississippi Beat” is the first single from forthcoming album ‘Companeros’ from Ian Prowse. A duet between Prowse and legendary Irish Gaelic singer Pauline Scanlon. Mississippi Beat is a  break-up song. The two singers became firm friends after performing together at the Liverpool Philharmonic Hall with Dublin legend Damien Dempsey. Prowse also tours with his band Amsterdam later this year and will play Gullivers. Manchester on 14th November.

Irata’s second album, “Sweet Loris”, will see release through Kylesa’s label, Retro Futurist, on  October 9th, 2015. The sound of Greensboro, North Carolina-based trio dodges genre barriers with dexterous, infectious grooves influenced by a variety of underground rock and metal scenes. Once an instrumental act, the lineup has shifted from a trio to a duo and back, and following several lineup shifts since their inception eight years ago, the band has solidified things with its most impressive recording yet.   With nearly forty minutes of material packed into seven new tracks, Sweet Loris was recorded by the band  at The Jam Room, produced by Phillip Cope and engineered by Cope and Zac Thomas, and the record completed with artwork by Santos and design by Phillip Yeary.  A fairly pungent release with a lot of energy echoing early Sabbath in parts – most enjoyable.

Transcendental Canadian duo, The Visit — comprised of cellist Raphael Weinroth-Browne (Musk Ox, Woods Of Ypres session) and vocalist Heather Sita Black -release their debut on October 9th. Fittingly titled Through “Darkness Into Light”, the album was recorded and mixed by Leon Taheny (Owen Pallett, Ohbijou) at Union Sound Company in Toronto, mastered by Alan Douches (Between The Buried And Me, Martyr) at West West Side Music in New Windsor, New York and offers up a five-track, hour-long journey that is both hauntingly beautiful and epic in scope.  A musical dialogue that transcends genres and idioms, the duo’s sound is characterized by long, compositions which can be compared to sacred music in their form and delivery.

The Visit  have received virtually unanimous praise for their live performances as well as their debut recording “Between Worlds”. The band secured coveted slots at Nouvelle Prague Festival in Prague, Czech Republic, Ottawa’s RBC Bluesfest, and the Royal Conservatory’s esteemed 21C Festival in Toronto. After refining their craft and sharing stages with artists of all genres, only one element was missing: an album. Combining the structures and instrumentation of classical chamber music with the intricacy of Middle Eastern and Persian music and the emotional and rhythmic weight of metal, their lengthy, through-composed pieces conjure sonic worlds in which listeners can immerse themselves. I don’t think anyone else will release anything remotely like this at any other time. It is completely unique, a partnership between a fragile voice and a riffed/bowed/plucked cello. Stark and uncompromising it demands your attention. 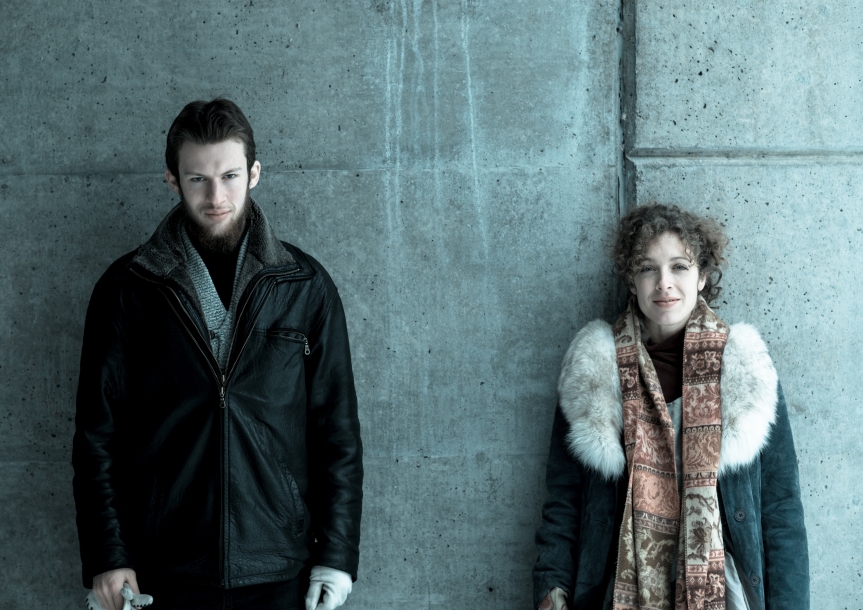 A new studio album from SUNN O))), “Kannon”, will be released officially on 4th December 2015 via Southern Lord. Composed in the after-shadow of SUNN O)))’s most recent successful  collaborations (the group worked with Scott Walker on Soused, Ulver on Terrestrials in 2013 and 2014) and also from the success  of their  Monoliths & Dimensions album, “Kannon” emerged both independently as a conceptual entity and with roots in the legacies of those projects, yet was fully realised years later, in 2015. The album consists of three pieces : Kannon 1, 2 and 3.

The album celebrates many SUNN O))) traditions; Kannon was recorded and mixed with SUNN O)))’s close colleague and co-producer Randall Dunn in Seattle, in Studio Litho, Aleph and Avast!; and the LP includes performances by long term allies and collaborators Attila Csihar, Oren Ambarchi, Rex Ritter, and Steve Moore to name a few. At the core, the composition centres around the dynamic and intense guitar and bass interplay of SUNN O)))’s founders: Stephen O’Malley & Greg Anderson.

“It is possibly the most figurative album SUNN O))) has created, which is unusual as they usually dwell in layers of abstraction and subjectivity. On the other hand the album is the most outright “metal” in years, drawing personal associations and memories of cherished albums like Panzerfaust and Twilight of the Gods again to the forefront of consciousness. Kannon is also very close to the cyclical character of mantra which the band has evolved into as a living creature, the enormity of intense sensate detail and manifestation of the live in concert element of SUNN O))), the organism that has flourished, metamorphosed and transcended tremendously over the past ten years.”

Kannon will be available on gatefold LP, CD and digital formats worldwide on 4 December, with a limited number of clear vinyl available on Black Friday RSD, Friday 27 November.

After casually self-releasing one of her singles, Nina instantly charted on number 4 on iTunes which got her a buffet of industry individuals wanting to get behind her as an artist. Totally by chance Nina’s paths crossed with a BMG/Chrysalis writer/producer Jo Pereira, known for his ‘out there’ way of thinking and ‘behind-the-scenes’ approach in production. The outcome of their collaboration comes in the shape of Nina’s upcoming new single Come Down.

Sounding like the perfect lovechild between Sky Ferreira, Ella Eyre and Major Lazer, Come Down is current, cool, edgy, memorable and worthy of everyone’s attention. Why, I hear you ask? Well, first of all, Nina’s vocals literally sound like silk covering a ticking bomb pulsating in the background. Then with the help of gritty synth bassline and powerful arrangements, the track explodes massively in each chorus whilst quickly becoming an unforgettable pinnacle to any listener’s ear.

The contrasting sonic spectrum of vulnerability and perseverance makes Come Down a powerful track and will be available for sale and download via 23rd Precinct/ Notting Hill Music on the 6th November 2015.

Stockholm’s Jenny Hansen’s new record “River” is a subtle blend of electro and pop. Down tempo, minimal electronic music powerfully led by a lush  vocal arrangement echoes Bjork during her Medulla period.  There’s enough glitchy things going on and a blues tinged soulful vocal makes this stand out, ‘River’ will be released on Monday 26th October.

Album Nº3 from Christina Vantzou is the result of a two-year process of composing, arranging, rearranging, experimenting, and melding classical instruments with synths and electronics. Recorded in Belgium with a 15-piece ensemble of strings, horns, woodwinds and micro-choir, the tracks vacillate between orchestral, ambient soundscapes and more structured works that the composer refers to as “pillars.” The internal core of the record  is a series of  drones surrounded by soft, subtle and sometimes intense clusters of sound.

The structured tracks mark a new direction for Vantzou. Whereas 100% of the music on albums Nº1 and Nº2 was composed without time structure or steady click, the pieces on Nº3 adhere to a solid mathematical scheme.  Nº3’s virtual instruments and voice samples hearken back to Vantzou’s time with The Dead Texan, specifically tracks like “Aegina AIrlines” and “When I see scissors I cannot help but think of you”. The synths on Nº3 were given special attention and were recorded over a 2 week period using a DX7, Yamaha CS20, Roland Juno-6, and a selection of eurorack modular synths, making Nº3 very much a hybrid record, both symphonic and synth-based.

It’s her best work yet.

Kowloon Walled City release their long-awaited new full-length this Autumn. “Grievances”, their third album and first for Neurot Recordings, finds the San Francisco band at its artistic peak, having moved even further away from its sludgy, post-hardcore origins and toward a more sparse, more melancholic detuned heaviness.

This shift began with 2012’s critically successful Container Ships, which Lambgoat described as “spacious” and “hypnotic,” with a “Shellac-like use of dead time and instrumentation,” and The Obelisk called “cerebral in approach.” On Grievances, the band takes these elements to even greater extremes. The strings rattle. The guitars crackle and blister. The notes ring out, at turns bleak and beautiful — sometimes both at once.

“We dug into this expansive, less distorted vibe. The songs are mostly slow and bummed out but we still want them to push, to have energy,” said vocalist/guitarist Scott Evans.

Evans, together with guitarist Jon Howell, bassist Ian Miller, and drummer Jeff Fagundes spent over two years working on the seven songs for Grievances. The intense editing process weeded out about two albums’ worth of songs. Howell’s unusual chord changes and discordant aesthetic channel Unwound and Slint. Miller’s gritty bass adds a surprising layer of depth and melody, while Fagundes’ drums resonate in what sounds like an impossibly large room. Evans’ shouted vocals are raw with frustration and disappointment, but without the typical veneer of macho aggression.

“We’re not interested in doing something that’s good enough — we want to do something that we believe is good,” said Miller. “With Scott’s concept and sonics and Jon’s playing and our rhythm section, we feel like should be able to do something interesting. But it’s hard work.”

The concept of work forms the thematic foundation of the entire record, from the cover art to the title and the lyrics. Whereas previous Kowloon Walled City releases were largely inspired by the band’s hometown of San Francisco, Grievances focuses its attention on our complex relationships with work and the power our employment — and employers — have over us.

As with Kowloon Walled City’s previous releases, Evans recorded and mixed, starting in Sharkbite Studios and finishing in his own Antisleep Audio, both in Oakland. “We’re not a fancy band. There are no effects to speak of, no reverb, no delays,” said Evans. “We each play one guitar, one pedal, one amp. So there’s not much to hide behind. I try to respect that in our recording process and our recordings.”

Kowloon Walled City formed in 2007 and has released an EP, Turk Street (Wordclock, 2008), and two full-length albums, Gambling On The Richter Scale (Perpetual Motion Machine, 2009) and Container Ships (Brutal Panda, 2012), as well as two splits. Among the bands it has shared stages with are Neurosis, Tragedy, Sleep, Thou, Coliseum, Zozobra, Fight Amp, Roomrunner, The Body, and Helms Alee.

Grievances will be released worldwide on October 9th, 2015 on Neurot Recordings, with vinyl on Gilead Media.