The record evokes a devastating and beautiful journey of becoming the last person on earth. Razor sharp tremolo picked guitars cut through the heart like a knife. Mournfully sung vocals and cinematic melodies are combined with crushing doom drums, while layers of primitive 90s digital synths conjure a lush and rugged soundscape.

All of the music on the album was composed and all instruments performed by Vouna frontperson Yianna Bekris (previously of Vradiazei, Eigenlicht, and Sadhaka). The music was inspired and influenced by Finnish funeral doom, English masters My Dying Bride, Eastern European black metal, and Greek folk music.

Vouna was recorded at the Wolves In The Throne Room studio, Owl Lodge, which is located at the edge of an ancient forest in Olympia, Washington State. Nathan Weaver collaborated with Yianna to create the artwork, which mixes archaic Hellenic mythic images with Cascadian atmospheres. 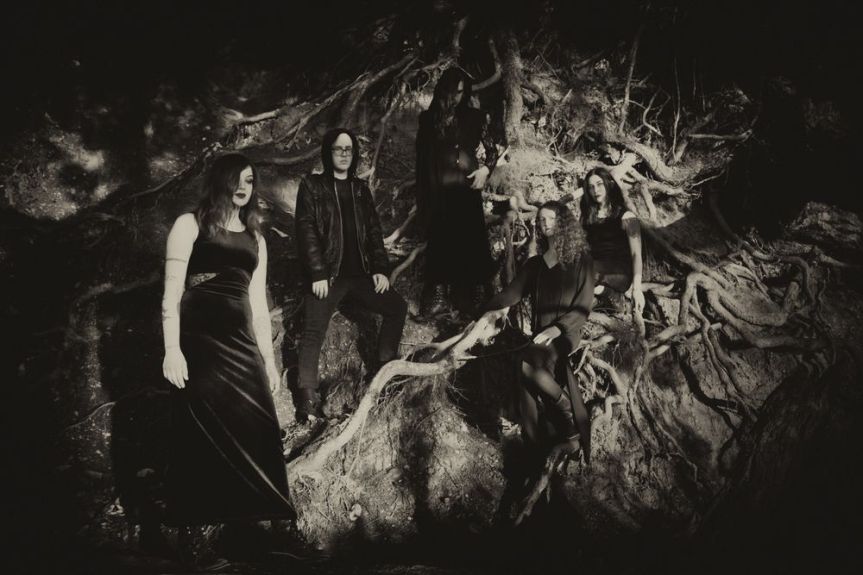 At 31 minutes the five track album does not overstay its welcome. The sounds are indeed grand in scale varying between simple strummed acoustic guitars and full on orchestral workouts. Yianna’s plaintive and mournful voice dominates and her multi-instrument dexterity is impressive . The sound varies between arcadian folk and cinematic doom metal via post-rock. Music of this kind can tend to be overlong and overblown but in this instance brevity and impressive structure result in a highly entertaining listening experience. At times I was taken back to the epic grandeur of the first King Crimson album.

I will feature the epic “Drowning City” on Aural Delights 310 on 8th November.

Preorders for CDs, LPs and other Vouna Merchandise are available at the Artemisia USA Store