On this weeks show ( you can hear it here):

Featuring on this show:

To listen to the show click the link below….

This show focuses on the band that have contributed to our latest free download which is available from September 1st ….. Sandells

to listen to the show……click the link below

Listen again via the link below 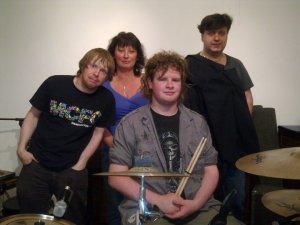 Self Released – due out in the summer

This took some time to get to me due to the vagaries of the british postal service.

Oddly when the jiffy bag arrived the stamp had not been franked….anyway I digress. I’d already had four of the tracks via the band in MP3 form so I was sort of primed on what to expect and I was looking forward to listening to the whole thing. It has been argued on more than one occasion that the conurbation of Mancunia is the pop capital of England (if not Europe) and that fine tradition is carried on here with some elan, with the added value of some rock elements that raise it above the mainstream of the hurly burly of indie boys and girls out there.

Another observation is that this band is unsigned and I have to say wipes the floor with a lot of the signed bands I get sent product for these days – I understand the majors are being approached and some are interested so I would assume it’s only a matter of time before they get a release and distribution.

This is a good album – it kicks off with the up-tempo “The Honeymoon Stranger ” which demonstrates the bands ability to play loud and hard – however  it’s perhaps not an indicator of the rest of the content of the album – it’s full of Manc swagger and four to floor rhythm and very listenable indeed.

The dreamy ballad “If I had all the answers” is lush, evocative and has just the right amount of guitar in it to give it an edge. Vocally, lyrically and melodically it has all the  elements of a classic and is my favourite piece on the album.  Next up waves of cheeky wah-wah guitar introduce “Last Orders” where singer Oskar manages to fold a Manc twang into his performance which gives it a unique feel. There is something incredibly populist about this music but at the same time it has a subliminal underground edge which makes you think “hang on a minute what have I just been listening to?” – this requires further listening as there are many disparate elements in these songs.

“Still Waters” drifts back into dreamy balladeering with, again, some nice guitar and ambient sounds to give it a bit of a kick.   “Redemption ” keeps the tempo at medium and perhaps suffers against the other tracks on the album in that it is the one that tends to sound like something else (which I can’t put my finger on). The list of influences on the band’s My Space page perhaps gives some sort of clue as to what has given shape to the music viz – John Lennon, Paul McCartney, George Harrison, Dylan, Rolling Stones, The Who, Kinks, Doors, Neil Young, Lou Reed, Marvin Gaye, Smokey Robinson, Roberta Flack, Gladys Knight, Janis Joplin, Dusty Springfield, Tamla Motown, Bacharach & David, Bowie, Queen, Slade, Marc Bolan, Elton John, George Michael, The Smiths, Echo & Bunnymen, REM, Radiohead, Paul Weller, Stone Roses, Stereophonics, Neil Finn, Verve, Coldplay, early Oasis, Cast, La’s, Zutons, Courteeners, Doves, Elbow, I Am Kloot, Tony Wilson.

The acoustic guitar and basic standard song piano arpeggios of  “Cult Madness” are more engaging and the emerging trademark sound of soulful songs with keening guitar in the background is best realised here. The song is beautifully understated and there is a very interesting imperceptible dark element to the music which moves it away from pop normality. The title track “Glory Days ” is a perfect summer song, and the faster paced “No One Ever Says Goodbye ” is packed with pop hooks to die for.

The string patch drenched “When Angels Came For Davey” perhaps is a little too maudlin for my taste but I can quite see the crowds at Wembley with their lighters in the air swaying gently to its gentle beat and humming along to the guitar melody. A bit too populist for this old rocker but for all that mighty pretty. The closing “Walking Down Your Way ” continues the laid back feel of the album and ends on a reflective note.

If  i’ve one criticism it’s that I would like the band to do more  up tempo numbers – when they do start to rock out a bit they certainly have the power and application to move the body as well as the mind. I wouldn’t normally listen to this type of music but Mandrake seem to have found their way to that part of my brain where I store my love of melody and great song structures.  I was struggling to recall what they reminded me of as I am not a particular follower of a lot of the influential artists listed above and then it struck me that there is a lot of Grant McLennan’s easy pop sound here – so they are a bit like The Go-Betweens without the angular elements brought by Robert Forster.

All in all a fine debut with a handful of classic Manchester pop tunes. If you like your music well written and melodic then you should check this out.

Listen to the show via the link below

On this show you can hear……

1.       Death to the Strange – Drink and the Devil – Single – currently on tour in Germany but will be back soon and are appearing at the Helmets for Men Stage at Sounds From The Other City on May 1st and the Salford City Radio Mayfest at Islington Mill on May 21st.

2.       Mancini Fires – Ghosts – Rise EP – Formed in 2009, the North Manchester/Salford – based 4 piece have finally completed their line – up, and are now working hard recording their new material… Combining strong vocals with an acoustic guitar underpinning them, a solid, dynamic rhythm section and melodic echoing lead guitar. The sound the band have in mind is reminiscent of early Coldplay with a nod to U2. Their songwriting conveys both heartbreak and hope in equal measure, it’s clear that this is a band with a lot of potential… From the bleak desperation of Tomorrow Yesterday to the uplifting highs of I Am Not The Same, Mancini Fires put an atmospheric twist on the classic quiet – loud formula, and also an intimate sound with a hint of Damien Rice and Doves can be heard on songs such as Ghosts. Appearing at Mayfest.

3.       The Black Paths – Our North is Rising –  Ibiza & The Hangover – Little Hulton’s master of the synthesizer with tunes inspired by a trip to the Balearics.

4.       Neuron No – Digital Doom – Free Download – Also appearing at Mayfest – i’ve waxed lyrical about the new EP elsewhere on this blog – this is a track that did not quite make it onto the EP.

6.       Mandrake – Last Orders – Glory Days – another track from the new album from the Manchester band that rehearses and records in Salford. Watch out for them they are great songwriters.

7.       The Fall – Last Orders – Live at the Witch Trial Expanded Edition – one of the earliest recorded pieces of work by longest surviving band in known history with any merit – featuring the second great line up of Smith, Bramah, Baines, Friel and Burns. Live at the famed Electric Circus in 1976.

8.       Jealous – Between the Streets and the Stars – Single – Swinton’s own with their new single.

9.       Kin – Flies – Flickering – another track from the best album so far this year – recorded at the remarkably groovy 6dB studios.

10.   The Black Paths – In the Zoo – Ibiza & The Hangover – more synth fettling from the western suburbs!

11.   Joy Division – Warsaw – An Ideal for Living – just after the switch from Warsaw to Joy Division and the band showing early punk leanings. 1976 when the summer was hot and the world was changing.

12.   Easterhouse – Get Back To Russia – Contenders – another blast from the past, a band which should have had much more success than it did.

Click the link below to listen to the show