To listen to the show click on the link below……

Lets kick off with Glassheads hailing from Wigan, they were formed in 2009. They comprise Ian McCluskey (Vocals/Guitar), Andy McKay (Guitar), Andrew Seddon (Bass) and Jon Davenport (Drums). They say they bring together “influences ranging from reggae, rock ‘n’ roll and hip hop to soul, disco and spanish guitar”. 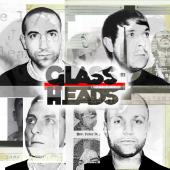 Their debut single, “The Error Of Your Ways”, is out now, and got an airing on Aural Delights last week.  There are snippets of four of their tracks on their My Space Page and a You Tube video of the “Boys Don’t Cry” tune,  they are currently recording the video for the new single. Their muscular guitar lead tunes are infectious, they remind me somewhat of Suzuki\Method, but without the keyboards if you see what I mean. The new single is a great piece of power pop with marvelous guitars and a great melody – McCluskey has a good voice and the song is a good example of the bands approach. I was also mightily impressed with the riffing on “Don’t Worry”. You can see them live at Manchester Academy 3 on 19th February and the Ram & Shackle in Fallowfield on 28th February.

Completely out of the blue I got a 21 track CD from a band called The Alphas called “Cultra Sansa”.  Aside from a rather groovy postcard shoved into the CD which has a scribbled hello on the back it’s difficult to discern much about these chaps other than they are a  four piece from Glasgow.  Internet searching provides no clues at all. The music on the CD is certainly varied moving from indie pop, through trumpet laden calypso type stuff, some basic disco throbbing, wacky country blues, and delicate folky ballads. If I was going to draw a comparison it would be something like a slightly less psychedelic version of Nectarine No 9, although “Clearer Now” which is about a third of the way into the album gets pretty psyche in places. I need to find out more about these guys!

Warm Widow were sent my way by the inestimable Mr Tony Thornborough, He has booked them for the first of his “Helmets for Men” extravanganzas for 2011. They are a Manchester three piece with a suitably acerbic, loud and compelling sound. This is essential music for people who love challenging and intense playing. With a broad sweep of sound similar to post punk leaders like The Birthday Party and The Fall the band take that particular piece of history (the early 80s) and modernise it with a nod towards a more melodic sense – in a sort of Sonic Youth way. Their Widower EP was released in October 2010 and is well worth a listen. I’m just  pleased that there are still bands around making this kind of music. Like Darwen’s Monster Island they stand apart from the mainstream and provide a useful cultural and musical quality standard which the vast majority of bands who are clones of Elbow et al should pay heed to. Check out “A Million Butterfly Skulls” and you will see what I mean. Essential!

Isolated Atoms are from Dudley. Their new single “Play” has found it’s way to me. The slightly dodgy local connection i’ve made is that their name derives from “Isolation” on the second Joy Division album. They were formed in 2008 and have been building up a reputation over the last three years. They have been working with Peter Hook, and have  a four track EP out in March. They play a heady mix of industrial Killing Joke like pounding rhythmic alternative electro rock. Singer Grant Ashman has a singular vocal style, strident and suitably unique enough to grab my attention. The single is released on 28th May via PPS music.

Always keen to look at new talent from Salford it was great to hear Eddie Legge and Tony Thornborough interview The Asteria last week on Eddie’s show (a great show Friday’s 3-5pm which has a regular feature from Tony on new and unsigned bands from the city). You can download their brash and bright power pop single “You Look Good Tonight” here.  The band say about themselves “The Asteria were formed in July 2010, hoping to quickly burst onto the music scene of Salford and work their way onwards and outwards. With so many influences brought in by five different characters, ‘The Asteria’s’ music is unique and energetic with the odd twist – built around classic rock with the edge of the modern alternative genre.”

Canadian Dave Stephens is based in California and has a new album out called “Time will Tell”. It’s his third, following on from 2004’s “Here We Go” and 2006’s “Stories for Copper”. His melodic rock music has a suitably raw edge which takes it out of the mainstream, as exemplified by the massive “Mr Wonderful” which is the second track on the album. The album has some softer moments with, for example, “More Than Me” offering a melodic ballad. In general though , and it’s clear from the vid-chip below, that Dave can rock out and writes a mean tune. I will be playing a couple of Dave’s songs on my show in a couple of weeks. More information on the man and his work here.